Herd of 28 cattle at Garphar broke down a fence and entered Laggan House Wood where they ate yew trees which poisoned them.  With medication, all except one were saved.

One of the eight standing stones known as the Grey Stanes of Garleffin, visible on the 1839 Ordnance Survey map, was blown up by a farmer

The schooner 'Circassian', sailing from Dundalk to Troon during a fearful gale, was wrecked near Glendrishaig with loss of one crew member.  Two crew members were saved by Peter Murdoch and his men using ropes, "at considerable risk to life".

The Scotsman Newspaper reported an unusual bird seen in Ballantrae, being a cross between a cock pheasant and a grey hen.  The bird allows one to approach it quite closely, and walks slowly with a peculiar strutting gait.

Silver Medal of the Royal National Lifeboat Institution awarded to Peter Murdoch of Glendrishaig, plus £3 to three of his men, for saving two crew members from the stricken schooner 'Circassian'.

Carrick Directory gave population of Ballantrae parish as 736 males and 704 females, of which 742 resided in the village.  Herring harvest value was £40,000-£50,000.  Village had three Public Houses, a Post Office & Telegraph Office, a Public Reading Room & Library, a Lodge of Good Templars, and a Golf and Tennis Club with 60 members.

Mr James Wason pressed for a larger harbour to be built.  About 400 boats were engaged in the Ballantrae fishing at this time.

Massive storm washed away part of the Ballantrae to Girvan road, and the high tide flooded village houses.  The harbour was greatly damaged with some foundation stones removed. 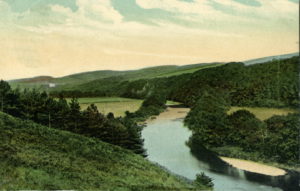 School Board resolved to abolish fees for the infant class and Standards I to V from 1st October.  Fees also reduced to a farthing a month for Standard VI and EX VI.  This was designed to eventually establish free education.

Ardstinchar Castle and the Kennedy Mausoleum (Bargany Aisle) were described and illustrated in Volume 3 of 'The Castellated and Domestic Architecture of Scotland'.  Its co-author David MacGibbon had owned Laggan Estate until 1881.