Auction held to sell the hull and materials of the brig 'Iris', stranded on the shore near Ballantrae.  Hull was sold for £130 to Mr Boyd, shipbuilder of Ardrossan.  Other materials such as sails, ropes and spars, were sold in 262 lots for £400.

Population of village was 515.  Population of Glenapp hamlet was 1442.  Ballantrae Parish had 12 Public Houses.

A steam crane, brought in to work on the new mansion house being erected for Mr Hunter of Glenapp, was being fired up when the boiler exploded, blowing off the upper part of a workman's head.  The other workmen were fortunately far enough away to be unharmed.

The Inn of Ballantrae (later the Royal Hotel) was advertised to let, due to the retirement of Mrs Haddow.  Along with the inn was the let of 60 acres of arable land and six acres of rough land.

Advert for unfurnished let of the "desirable residence commonly known as the Castle in Glenapp, Parish of Ballantrae".  This may have referred to either Carlock or Glenapp.

A blacksmith by name of Clark was killed by his wife who struck him with a poker while defending herself from a drunken attack.  The post-mortem revealed that the blow was not sufficient to have killed him.

William McConnell of Knockdolian was appointed a Road Trustee

The School Board sought estimates for new schools and schoolmasters at Ballochdowan and Auchenflower.  Advert for male teacher for Auchenflower gave salary of £55 per annum plus school fees and government grants amounting to approx. £50, plus an allowance of £10 per annum until a schoolhouse was built.

Glenapp had Post Office listed under Ballantrae, and later under Girvan

A memorial stone for the new Free Church of Scotland was laid by Mrs Hunter of Glenapp.  The church was built from a design by Mr Barclay, Glasgow architect, at a cost of around £1400.  Dinner was served in the Free Church School for the new Minister's Ordination.

Counterfeit coins resembling shilling pieces and sixpence pieces were found in the possession of James Carleton, residing in or near Garphar Cottage.  He was sentenced to seven years penal servitude, this being his fourth offence of this nature.

Number of communicants at Glenapp Church (also known as Butter's/Butters Church or Chapel) was 68, made up of 33 male and 35 female

Advert in The Scotsman newspaper for certificated female teacher at salary of £40 per annum with house and garden, plus school fees and government grant

Advert for a certificated female teacher for the Public School in Ballantrae at salary of £60 per annum.  Required to be competent to teach sewing, drawing, pianoforte and vocal music.

Advert for a married male teacher for Ballochdowan School (about 30 pupils) at salary of £70 per annum with free house.  Instruction in needlework to be given by his wife.

September floods made the coach road impassable with three bridges or culverts over streams washed away.  Finnarts House was flooded and the staff forced to flee.  The River Stinchar at Ballantrae rose by five feet.

Auchenflower Estate put up for sale.  The proprietor Mr McIlwraith will show the lands.

A larger Free Church built at the eastern end of Main Street.  The old Free Church in Church Street became the village Hall and was used as a reading room, library, snooker room and ballroom, with a two-roomed apartment for the caretaker and his wife.

Hugh McQuiston and James Allison, both of Ballantrae, sent to prison for assaulting a man named McCreath by throwing him over the bridge to his severe injury

Ballantrae Golf Club founded.  The 9-hole course was designed by William Fernie of Troon, who would later design the Ailsa Course at Turnberry which opened in 1901. 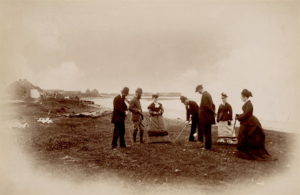 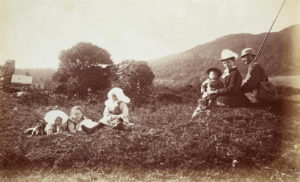 The Ardrossan brig 'Aurora' wrecked on Ballantrae shore on its way from Belfast to Troon.  Crew were landed by lifeboat.

500 men engaged in the herring industry, which had to be abandoned in February due to bad weather

Thomas FitzMaurice, 5th Earl of Orkney, died at Glenapp in May.  His great-uncle was William Petty, British Prime Minister.

Kirkhill Castle – John B. F. Gray of Glentig and Ballaird