Ship 'Water Nymph' wrecked on Downan Point on 7th March.  Body of Captain McLinty later washed up on the rocks.

A 50-ton smack sank off Downan Shore on 7th October.  Wreckage which washed up included a ladder branded with the name 'Hope of Douglas'.

Auchairne mansion house offered to let for one or more years, along with shootings, stabling for seven horses, byre and pig houses

Commissioners for the proposed new railway were named as Alexander Cathcart of Knockdolian, James McIlwraith of Auchenflower, and Henry Hughes Onslow of Balkissock

The smack 'Rose', lying in Ballantrae Harbour with a cargo of potatoes, was in danger due to inclement weather.  Local man John Kennedy went aboard with the Master to see that all was well.  When both fell into the water, the Master managed to save himself by catching a rope and pulling himself on board, but John Kennedy was drowned.

Ballantrae salmon fishing reported as being the poorest for many seasons, with one week showing not a single fish caught in the six bag nets regularly fished

Steamer 'Briton' on its way from Ayr to Stranraer got stuck on sunken rocks off Ballantrae.  All 30 passengers were safely brought ashore by Ballantrae boats.  The hull, machinery and boilers of the 'Briton' were later auctioned.

Public Meeting held to promote a railway from Girvan via Pinmore, Colmonell and Auchencrosh to Lochryan, where it was proposed to make the terminus at Finnarts Bay to link up with the Packet ships to Belfast

A meeting agreed to support the railway from Ballantrae to Cairnryan and Stranraer as recommended by Mr Bruce, a civil engineer from Edinburgh.  This proposal was supported by Sir James Fergusson MP, and Provost Caird of Stranraer.

Board of Fisheries reported that expenditure on Ballantrae Harbour was £5,585 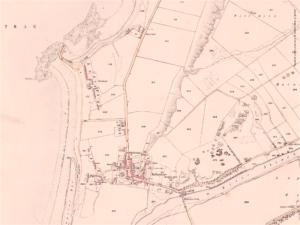 Mr Hugh Kerr of Colmonell and his ten-year-old son were drawing the salmon net at Bennane Head when Mr Kerr overbalanced, fell in the water and was drowned

Vessel 'Jessie Paterson' of Irvine with a load of lime was driven onto the rocks at entrance to Ballantrae Harbour, caught fire, and burned to the water level.  The crew were all saved, along with a considerable quantity of rigging, spars and sails.

People in Ballantrae Parish listed in 'The Ayrshire Directory'  1851

Also noted in the Ballantrae entry were

'County Voters Not Resident in Ayrshire':

John Donaldson of Auchairne – with his regiment in India