All Ballantrae houses had thatched roofs up to this date

The farm of Shallochwreck offered for sale, consisting of 400 acres of which 200 acres were fit for turnip husbandry 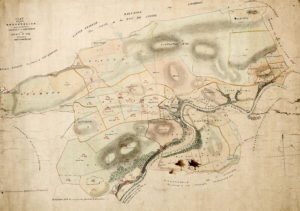 The Estate of Ballantrae, including village, harbour, and river salmon fishing, was advertised for sale in The Scotsman newspaper on 12th January

Population of Ballantrae Parish was 1506, with 456 living in the village 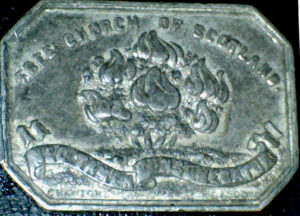 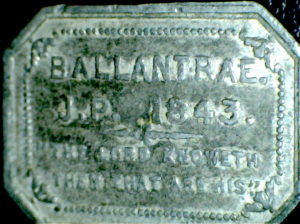 Construction of Free Church began with foundation stone laid on 18th April by James McIlwraith of Auchenflower, and the church opened on 20th December.   The Minister was James Porteous whose initials J.P. are seen on the communion token.  This building in Church Street would be superseded in 1876 by a larger Free Church built at the eastern end of Main Street.

Laggan House bought by the father of David MacGibbon, the famed architect and historian (1831-1902) who later co-wrote 'The Castellated and Domestic Architecture of Scotland' and other iconic books

The cod season at Ballantrae was reported as less successful than in former years.  Eighteen boats were engaged, with the average daily take per boat being one barrel selling at 15 shillings.  Many fishermen sustained great losses to their lines caused by English fishing smacks using trawl nets on the cod fishing grounds.

Joseph Lowe's 'Collection of Reels, Strathspeys and Jigs' included the reel 'Bonnie Lass of Ballantrae' which he attributed to Captain Fraser.  The composer is thought to have been Captain Simon Fraser of Knockie, although the reel does not appear amongst his own collections.

Proposal for rail link to Ballantrae

The Earl of Orkney moved the last of his birds and animals from Windsor to Glenapp.  This collection included a fine East Indian stag, a male and a female emu and three young emus, six Mexican deer, six Berkshire pigs (two of which he gifted to Mr Whyte at Garphar), and 45 brace of pheasants.  A number of eggs were gathered from His Lordship's capercailzies at Glenapp.

Harbour built with Arran free stone, paid by £2,000 from fishermen and £4,000 from Board of Fisheries

James White of Garphar broke his spine in a fall from a haystack, and subsequently died

Road completely blocked by the biggest snowfall recorded for many years.  The whole road from Auchairne road-end to the head of Glenapp was impassable, with snow being 8-10 feet deep in places.  A hearse and funeral party were blocked near Auchencrosh, and the hearse had to be left in the snow.  The driver of the Irish Mail Coach got stuck in a drift near Kilantringan Toll and was forced to stay at the Toll House overnight.  The Road Surveyor, Mr McCall, sent thirty men to clear the road which they managed to do in a day.

The Royal Yacht 'Victoria and Albert', containing the Royal Family and part of the Royal Squadron, sailed closely past Ballantrae on its way up the Firth of Clyde after a visit to Lochryan

Mr Andrew Miller, the Postman between Ballantrae and Daljarrock, was recorded as having walked 19 miles per day (Sunday excepted) for 14 years, calculated at 83,258 miles

Advert for a resident Medical Practitioner for Ballantrae, offering a salary for three years of £36 per annum supplemented by employment with the Poor Law Board of at least £14 per annum.  Applications were to be submitted to the Rev Mr Milroy, Minister of Ballantrae.

Glenapp Church built with an endowment from Mrs Caddell.  Her maiden surname of Butter led to this church often being referred to as Butter's Chapel or Butter's Church.