Ballantrae got its first resident surgeon, after having no surgeon or physician within a dozen miles

Pleasure boat 'Harriet', owned by the Duke of Portland, lost off Ballantrae with all crew

Windows inserted either side of pulpit in Ballantrae Parish Church

Subscription Library began with over 100 books plus newspapers and magazines

Rev. John Milroy supplied the Parish of Ballantrae entry, dated April 1836, for the 'New Statistical Account of Scotland' which would be published some years later.   He reported "The air appears to be salubrious, for there is a number of very old people in the parish, and the inhabitants in general are of a robust make and hale florid complexion, quite free of any peculiar disease, and generally not much visited with the ordinary diseases that assail our nature".

The village had 84 houses.  Most families in the parish were employed in agriculture, and a few in weaving cottons for Glasgow manufacturers.  A good many were tradesmen in one season and fishermen in another.  Labourer wages averaged about one shilling and sixpence per day.  Women's wages for field labour were eightpence per day.  Joiners charged two shilling per day, and masons two shillings and sixpence.    About 5000 stones of sweet milk cheese was made every year in Ballantrae, and an experienced dairymaid earned about £5 per year compared with the £2 to £4 of a female servant.

An annual ploughing match was held with upwards of 30 ploughs competing.

An annual livestock show begun in Ballantrae in 1832 had by this time extended to include Barr and Colmonell parishes under the name of 'The Stinchar Association', and the show was held by each parish in turn.

143 pupils (96 males, 47 females) attended the four parish schools.  Tuition was available in Latin, Greek, book-keeping, mensuration and geography in some of the schools.

Peat was still being cut for fuel by folks living in the hills, but coal was now the main fuel used by the other parishioners.  It was brought from Girvan in farmers' carts and sometimes by boat.

The total population of the parish was now 1506, nearly double the number noted in the Old Statistical Account of Scotland of about 40 years previously.

One good inn and five public-houses were in Ballantrae village whose population was 456, and the minister noted yet a further public-house within the parish.

There was no constable or sheriff's officer, but there were two Justices of the Peace and a Court was held every two months in the village. 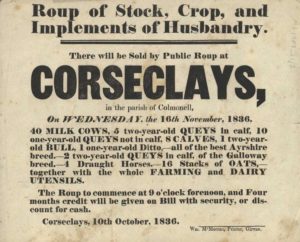 The Irish Mail Coach overturned two miles north of Ballantrae, severely injuring the driver James Johnston.  The guard was badly bruised, but two inside passengers, Mrs Oliver and Mr Main, were unhurt.  All involved were transported to Ballantrae.

Birth of James Paterson Wason in Girvan parish, who died in Ballantrae at age 61 in 1901 having contributed greatly to the community

The sloop 'Plough' of Stranraer, heading to Glasgow with a cargo of barley, was wrecked off Ballantrae on 6th January