By April 1801, there was supposedly no further need for a military barracks at Ballantrae because the smuggling trade was ‘entirely given up’. Not quite! 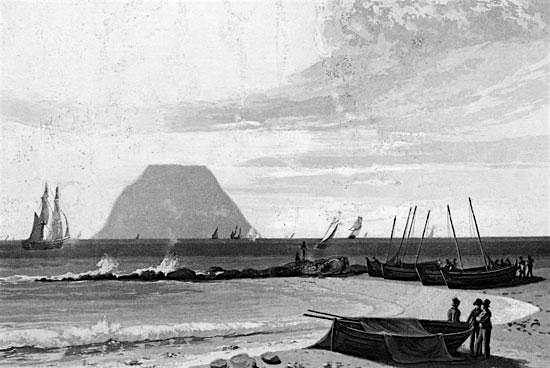 The ship 'Peggy' from Greenock on its way to Liverpool loaded with salt, tar, stoneware, cheese, etc. was wrecked 3 miles north of Ballantrae. Four crewmen were saved but the cargo was almost totally lost.  Lieutenant Hugh Ross of the Ballantrae Volunteers along with a detachment of his men prevented any of the wreck being taken away.  Despite the exertions of the officers stopping the inhabitants stripping the ship, several instances were detected and locals detained. The sitting Magistrate imposed the full penalty of £5 upon two of the transgressors.

The 9th Troop of the 1st Royal Dragoons on their way from Hamilton to Ireland attempted to cross the severely flooded River Stinchar at Ballantrae.  Five horses with their riders were washed away in the current and only with the help of the local people were they saved, four of them by people wading into the river and the fifth by a boat crewed by four Ballantrae lads further downstream.

A diligence (carriage) commenced running on 11th March from Blair’s Arms in Portpatrick to the King's Arms in Ayr on Tuesdays, Thursdays and Saturdays, stopping at Ballantrae.  The total journey time was 12 hours.

The sloop 'Friends' under Captain Bain, sailing from Greenock to Westport, came ashore at Ballantrae.

In October 1807, the comptroller of customs at Stranraer and the crew of the Cumbraes revenue cutter were busy seizing the smuggling boats at Ballantrae when they were attacked by Robert Coulter’swife, Janet Wilson. She wounded one of the mariners, Robert Cuninghame: the Board of Customs was responsible for his medical bills.

In the same month, the customs officers Robert Williamson and David Ferguson seized the Tartar, John Scott master. Scott appeared in the Exchequer Court at Edinburgh, where he was fined £100. He sent a petition to the Board of Customs, explaining that he was indigent. This was ‘no apology for hisbeing concerned in defrauding the revenue nor any good reason why he should not be punished’. However, ‘out of clemency to his family’, the prosecution against him was suspended ‘unless and until’ the Board was told that he had been smuggling again, in which case, ‘he will then have himself to blame, if he meet with no further clemency’.

In 1808, John McWhirter was still attempting to receive recompense from the widows of Hugh Aitken and William Brackenridge for the missing four hogsheads of tobacco.

On Wednesday, 31 May 1809, both James Coulter and Sarah Rowan, Thomas Coulter’s wife, were charged 40s per lb. for landing salt in bulk from Ireland.

Two of the Coulters were delivered to the Navy in December 1807, because they had been found on board a smuggling boat with contraband salt and because they were seafaring men. They both deserted from the Navy, William in January 1809.

William Coulter was still a free man, when his case was re-considered in February 1812, in thecontext of King George III’s pardon granted to deserters from the Navy. This pardon did not cover Coulter and he could be ‘again lawfully taken and delivered over to any officer of the Navy’ so that he would serve the remaining time of his ‘sentence’. As a warning to others who might think aboutdeserting from the Navy, ‘it is very desirable that he should be again taken and compelled so to serve’.